My juniper bushes got spider mites, suddenly and extensively. They came seemingly out of nowhere and made a significant stand, claiming wide real estate over a number of the ornamentals lining the fence between us and the neighbors.

Spider mites are not true insects but a type of arachnid, relatives of spiders, ticks and scorpions, that can seriously suck the life force out of a plant. I knew I needed to act fast.  Having long been oriented to organic gardening, I was clear I didn’t want to spray a heavy miticide chemical, but I also knew that I had to intervene as each day seemed to bring a widening incursion. 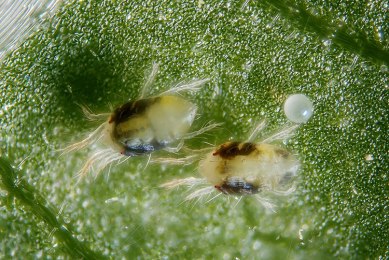 After reading more on the issue, it was thought-provoking to note that spider mites often become a problem (or worsen) after broad-spectrum insecticides are sprayed since those applications kill off beneficial insects like wasps and other mites (like the western predatory mite) that naturally feed on spider mites. Over all, it’s best just to knock down the population of the spider mites and allow their population to be balanced by the common insect predators that limit pests—the “beneficials.”  It’s not an uncommon technique to introduce more or different beneficial insects to expand their population in the garden.

Integrated pest management, or IPM, is a process used to solve pest problems while minimizing risks to people and the environment. I’ve found such an approach very effective over the years. You can read about the approach from the University of California Agriculture and Natural Resources.

Do what is needed to help resolve the problem, but strive to avoid making it worse—the gardener’s version of “do no harm.” And by all means, don’t kill off the beneficials, because without them the infestation only gets worse or rebounds quickly.

This got me thinking about incivility and the seeming explosive infestation of it we seem to be experiencing now in society. (Or is it better to say the wider culture?)  It seems to me that more and more, people are agitating for a broad-spectrum approach, which seems to be an attempt to respond to incivility with more of the same—a strange manipulation of “fight fire with fire.”

This, of course, being linked literally to firefighting techniques of using backfires to remove potential fuel from the path of a larger fire.  Ironically, it’s more about removing combustible material from a terrain to lessen the intensity of the main fire, slowing or stopping it’s advance, hoping for it to “burn itself out.”  Its common use seems to have morphed into the idea that we return fire with more fire, which seems to defeat the original, more measured meaning.

If the infestation in my analogy is incivility, I’d like to think of the “beneficial” as being civility, which is a way of behaving though it’s often seen as weakness and possibility a form a capitulation.

Logo of the Civility Site of Vincennes University

I’m not implying that the initial infestation should be left unabated. Some intervention is required; however, again, the intent is to use an approach that minimizes risks.

In my case with the spider mites, it was a mild organic oil spray and a couple of regular rinses with water to wash away the tiny invaders to stop them from sucking the life out of the shrubs.  It took a bit more effort than spraying an intense chemical, but I think things are balancing out.

Homeostasis, from the Greek words for “same” and “steady,” refers to any process that living things use to actively maintain fairly stable conditions necessary for survival.

“So let us begin anew—remembering on both sides that civility is not a sign of weakness, and sincerity is subject to proof.”

~JFK, at his inaugural address