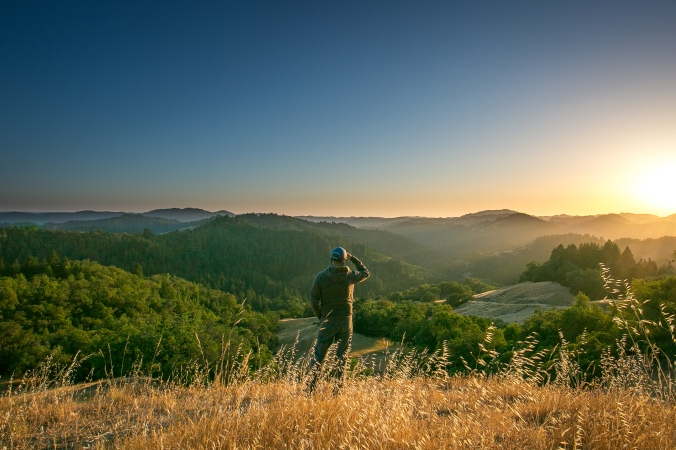 Until we understand what the land is, we are at odds with everything we touch. And to come to that understanding it is necessary, even now, to leave the regions of our conquest—the cleared fields, the towns and cities, the highways—and re-enter the woods. For only there can a man encounter the silence and the darkness of his own absence. Only in this silence and darkness can he recover the sense of the world’s longevity, of its ability to thrive without him, of his inferiority to it and his dependence on it. Perhaps then, having heard that silence and seen that darkness, he will grow humble before the place and begin to take it in—to learn from it what it is. As its sounds come into his hearing, and its lights and colors come into his vision, and its odors come into his nostrils, then he may come into its presence as he never has before, and he will arrive in his place and will want to remain. His life will grow out of the ground like the other lives of the place, and take its place among them. He will be with them—neither ignorant of them, nor indifferent to them, nor against them—and so at last he will grow to be native-born. That is, he must reenter the silence and the darkness, and be born again.

(pg. 27, A Native Hill)―Wendell Berry, The Art of the Commonplace: The Agrarian Essays

It is can be challenging to talk about ecological issues without stumbling into a political schema that might determine the flow, if not conclusion, of the conversation. I certainly don’t want to imply that the politics of saving the environment aren’t important; however, the topic certainly deserves to me more than a determinate of political orientation.

I believe it is possible to have a determined commitment to the land and environment, and a vision is of sustainable, responsible stewardship and experience of the land, flora and fauna, that isn’t a political statement but a philosophy of life.

I’m happy to share that I just became a certified California Naturalist through a program operated by our University of California (UC) Agriculture and Natural Resources department. It was a 6-week blend of reading, independent research, classroom time and a culminating project; it’s actually modeled on California’s Master Gardner program, but in nature.

Most every state in the United States has a Master Naturalist Program, often developed in conjunction with Universities and County Extension offices.

A naturalist might be described, at a basic level, as one who observes, studies, and interprets the natural world. Even more elemental, I believe, is a profound and engaging love of the natural world and its effect on us humans—the “force” so essential in the “Star Wars” mythology. A “a metaphysical, spiritual, binding, omnipotent and ubiquitous power,” as articulated on Wookiepedia.  (Yoda, a naturalist he was.)

John Muir, an early California naturalist, once said, “When we try to pick out anything by itself, we find it hitched to everything else in the universe.”

So, there you go. I am happily hitched to everything else in the universe and committed to finding a way to engage my connection as a naturalist. I hope that I will find a way to observe, study, and interpret the natural world in a way that brings some benefit to my community and those connected to it.